Premature ejaculation might be one of the most common issues that men face, it doesn’t have to be bothersome when there is an effective techniques to stop premature ejaculation in place. In our completed guide to premature ejaculation, we found the causes and symptoms of PE and how it hurts a man’s life. Today we are going to discuss some of effective methods that help guys stop the early orgasms so that intercourse can last as long as you want it to last. 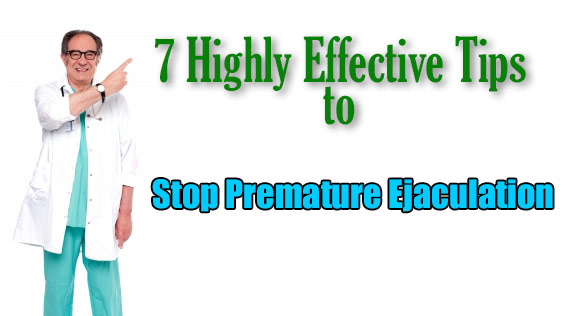 Treatments a techniques to prevent premature ejaculation that actually works.

Here are the most effective techniques to prevent early ejaculation and last longer in bed. We highly recommend you to try these techniques before going for pills or PE creams.

Squeezing stops the action! This method can be used with method #1. By squeezing the base of the penis, when an orgasm is about to occur, the strength of the erection can be reduced and this can prevent the orgasm from occurring.

Stronger muscles will often bring about better results. By exercising the pelvic floor muscles on a regular basis, the ejaculate that is produced for expulsion during intercourse can be held back longer because the Kegel muscles have more strength to them.

Stress is often the cause of premature ejaculation, so take a few moments to breathe deeply to calm down. Even just a 5 second deep breath during intercourse can alter the flow of an orgasm.

For men who really struggle with premature ejaculation, some of the techniques of Tantric sex can provide some amazing benefits. Although it requires men to pull out when they approach their point of not being able to stop, certain body movements, like putting the chin down to the chest, can reduce the urgency of an orgasm and allow intercourse to continue.

#6. Benzocaine works when nothing else does.

Instead of apply benzocaine directly, however, try using a condom that has it within the tip. It can delay a climax by up to 5 minutes when the condom is used according to its instructions.

A new medication called Promescent has been recently approved by a number of worldwide governing agencies. It is a topical rub that is applied about 10-15 minutes before intercourse is to happen. It absorbs through the skin so that a sexual partner is not affected and it desensitizes the nerve endings so that more control is had during sex.

How about Pills and Creams?

There are oral medications that claim to cure premature ejaculation and there are creams and PE sprays in the market that promise you to delay the climax and last longer during intercourse. However many of these drugs have undesirable side effects. Hence we suggest you to follow the above list of exercises and techniques first.

These effective tips to stop premature ejaculation will help guys perform at their very best in a consistent manner. Implement the options that will best work for you today and then enjoy all of the benefits!